Comments Off on Asus Strix Brings FreeSync Gaming Monitors into the ROG Family
Posted June 9, 2017 by Josh Jackson in Displays

I haven’t covered a ton of releases from Asus and there’s a couple of reasons for that. For starters, I don’t get PRs from them which always makes it a bit more difficult. On top of that, much of their products revolve around GPUs and motherboards, which have a plethora of releases from numerous companies making it hard to keep up. So while Asus does have plenty of great things worthy of notoriety, the news of new Strix monitors was impossible for me to pass up based on some features I’m seeing.

First and foremost is the fact that these guys have brilliant RGB lighting on the back of the panel. We’re one step closer to that RGB lighted printer I need to have to complete my room. I love this feature simply for the looks, but if the glow is strong enough from the back, it can also help with eye fatigue by setting it to a hue that matches the screens. One of the models has a 240 Hz refresh rate and while I can’t buy into the hype just yet, I’d love to see that range for myself to see if it’s noticeably smoother than 144 Hz. Even then, the real reason I wanted to post this is the Strix XG27V. Sure, this isn’t the flashiest, but I think Asus hit the nail right on the head by giving the perfect balance of features. The resolution is cut down to normal 1080p, the refresh range has a 144 Hz peak and the screen has a 1800R curve with 27 inches of real estate. I think this gives gamers the perfect balance of the best features for a display that can have a great price point, especially with FreeSync.

Unfortunately, Asus hasn’t released pricing information on any of the three displays announced. If the XG27V can come in under $300 though, I could pretty much call it as the best cost to performance monitor available, though I would only officially state that from a review standpoint if the monitor held up to scrutiny. The only detail I haven’t figured out is if it keeps the IPS panel its larger sibling has. Check out the rest of the details below and let us know your thoughts in the forums.

At Computex 2017, the ASUS Republic of Gamers rolled out a collection of Strix gaming monitors compatible with AMD’s FreeSync technology. The new displays bring bigger panels and higher refresh rates that draw you deeper into your favorite games. They include the Strix XG32V, which cranks a massive 31.5” panel up to 144Hz; the Strix XG32V, which applies the same refresh rate to a 27-incher ideal for surround setups; and the Strix XG258, which takes competitive esports to an incredible 240Hz.

All three are compatible with Adaptive-Sync technologies like AMD’s FreeSync. They dynamically adjust the refresh rate to match the frame rate of the graphics card, resulting in smoother gameplay with lower input lag and no visual tearing. If you want to reduce blurring with a fixed refresh rate instead, we’ve incorporated an Extreme Low Motion Blur mode that strobes the backlight to improve the look of rapid motion.

The Strix XG32V has a big and beautiful curve

As unoriginal as it sounds, size really does matter for gaming monitors. The bigger the view of your digital world, the easier it is to get sucked right into it. That’s why we’ve given the Strix XG32VQ a huge 31.5” panel that works well up close and at a distance.

Curved on an 1800R radius, the screen gives you a better view of the far edges and corners. The wide 178° viewing angles of its IPS-type panel preserve the picture even if you’re not sitting dead center, so you can gather around teammates or opponents for multiplayer action that looks great for the whole crowd. The WQHD 2560×1440 resolution prioritizes performance over pixel density, which will let you explore the top end of the 144MHz refresh range without spending a fortune on multiple graphics cards.

Aura Sync lighting makes the XG32V compatible with a comprehensive ecosystem of RGB-equipped components that synchronize illumination across an entire PC, both inside and out. You can match the colors of the rest of your rig or have the LEDs react to the in-game audio.

Dual DisplayPort 1.2 inputs provide connectivity for multiple PCs, while one HDMI 2.0 offers flexibility for consoles and other devices. And there are USB 3.0 ports built in. Considering the size and flexibility, it’s easy to see the Strix XG32V replacing a traditional TV in dorm rooms and small apartments, especially for cord cutters addicted to streaming Netflix, YouTube, and Twitch.

Balance speed and affordability with the Strix XG27V

Affordable gaming hardware delicately balances performance and features to give you the most bang for your buck. In the Strix XG27V, we’ve focused on giving gamers an engaging high-refresh experience that won’t break the bank. 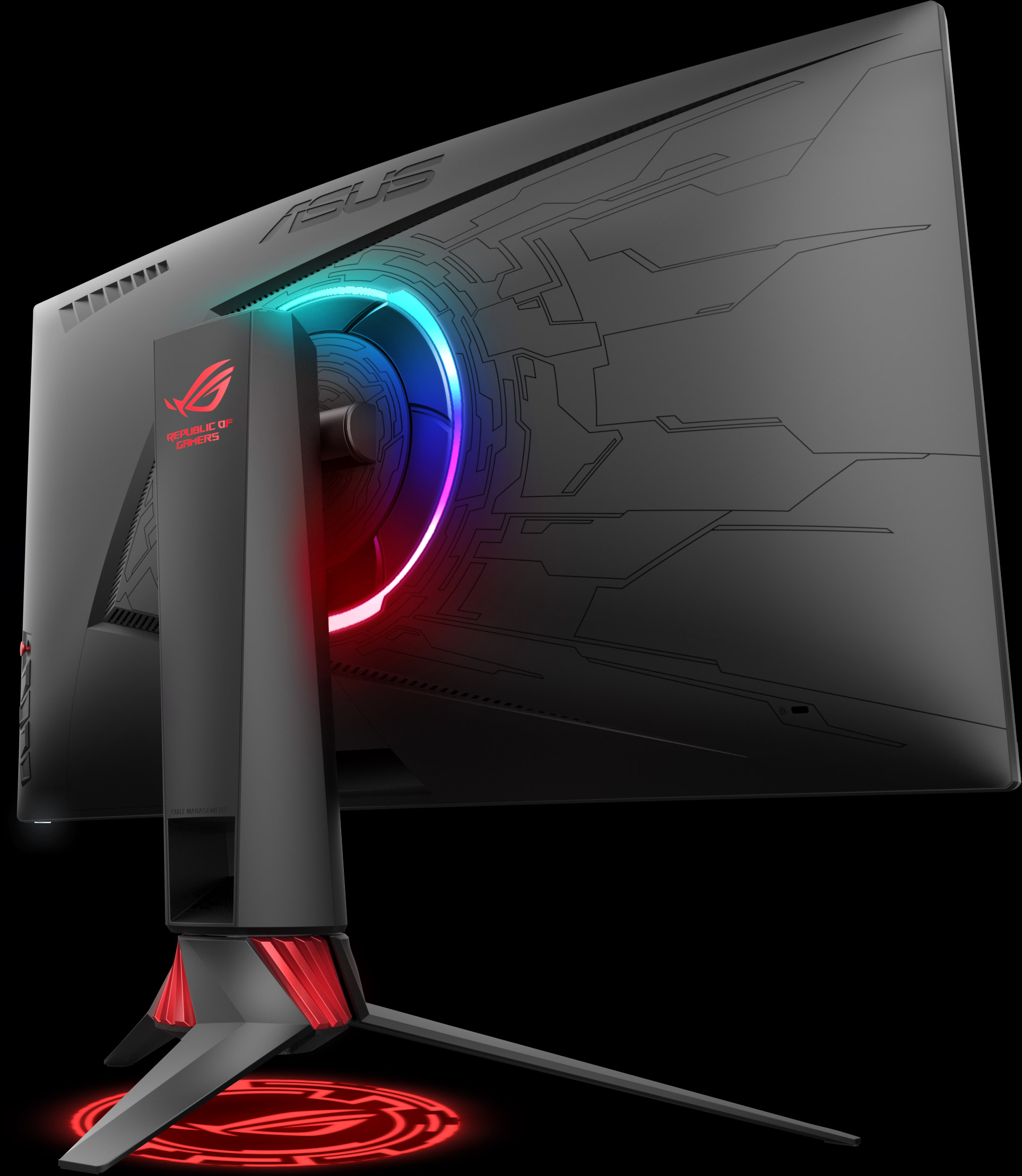 Like its larger sibling, the screen wraps around an 1800R curve that improves your view of the corners, where important HUD elements tend to live. The Full HD 1080p resolution means you can make the most of the 144Hz peak refresh rate without blowing your budget on high-end graphics horsepower. It also keeps the performance requirements reasonable if you want to give your battlestation a panoramic upgrade with a triple-monitor array.

Although the Strix XG27V has onboard Aura RGB lighting, multi-component synchronization isn’t supported. Video inputs span DisplayPort, HDMI, and DVI, allowing even older systems to connect without an adapter. You also get useful features shared with the rest of the Strix family, like an intuitive interface for the on-screen display and separate DisplayWidget software that controls the monitor from the Windows desktop.

ROG is at the forefront of esports; we sponsor numerous professional teams and work with top players to improve our products. The Strix XG258 reflects the fact that even a small performance advantage can make you more competitive at the highest level. Its 240Hz maximum refresh rate is four times faster than what you get in typical PC monitors—and a substantial step up from the 144Hz ceiling of its Strix teammates. At 240Hz, the delay between new frames is just 4.2 ms, compared to 6.9 ms on 144Hz gaming monitors.

Minimizing milliseconds extends to the panel, whose 1-ms response time enables quick pixel transitions that reduce blurring with fast movement and frenetic action. The 24.5” screen has a Full HD 1080p resolution to give your system the best shot at sustaining the 240 FPS required to push the Strix XG258 to its limits. 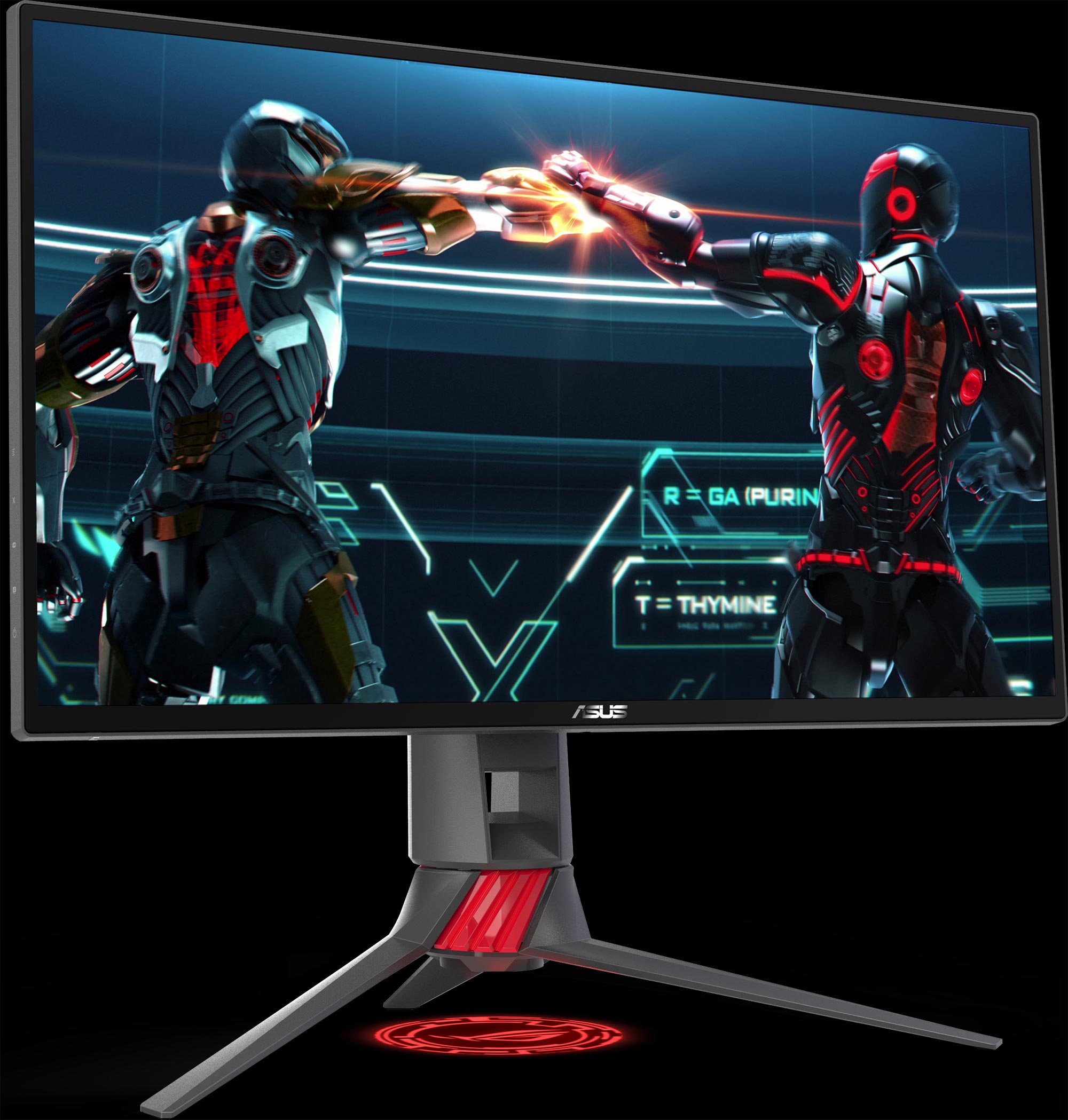 Aura RGB LEDs enable color coordination with the rest of your setup. Sync isn’t supported, so you’ll have to match colors manually. You can mix and match connected devices, too. With dual DisplayPort 1.2 and HDMI (2.0 and 1.4) inputs, the Strix XG258 can plug into range of PCs, laptops, and other devices simultaneously.

All of these new ROG Strix gaming monitors will be available starting in Q3. Please contact your local ASUS or ROG representative for details on pricing in your region.

This 32″ Curved Monitor has a Great Price, but a Big Catch
Arctic Cooling