So, I’m browsing the internet trying to find out whether I should save some cash and go with the i5-6600K, or go all out with an i7-6700K. I already know that there won’t be much of a discernible difference with current games, but DirectX 12 games are on the horizon, I just got a beta invite to one such game, and there could be some performance to gain from the hyper-threading. I didn’t find the info I wanted, but I did find something astonishing. The GTX 980 Ti seems almost untouchable, but you can imagine my shock when I saw an R9 290X tying, and even beating the Maxwell behemoth in several benchmarks. 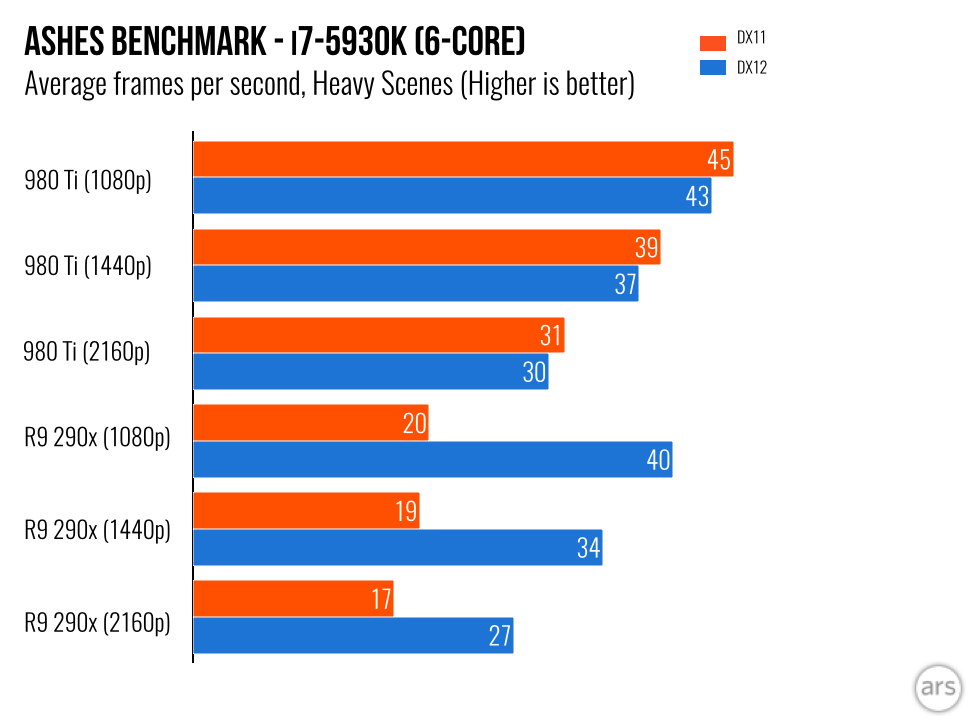 Yesterday, I did a pretty heavy write-up on some Ashes of the Singularity benchmarks that surfaced about a week ago. It turns out, those weren’t the only ones done. Ars Technica decided to do a very comprehensive set of tests that involved comparing an old school R9 290X with a very state of the art GTX 980 Ti and pretty much showed the card matching the NVIDIA flagship on every turn. The 980 Ti still destroys AMD’s part in DirectX 11, but once we get to 12 we see a super competitive landscape. Here’s a couple patterns I noticed. The GTX card benefits slightly more from 6 cores and hyper-threading than the R9 card does at higher resolutions. The NVIDIA card also has a slight advantage with average framerates during the heavy scenes. An interesting thing that was happening was that once hyper-threading was disabled and the CPU was reduced to 4 cores, the AMD cards actually performed slightly better. What really blew my mind was, the 99th percentile FPS scores heavily favored the AMD card, which is generally an area the R9 290X suffers in. If this level of performance keeps showing up in other DirectX 12 games, we can expect the Fury X to absolutely blow the competition away! 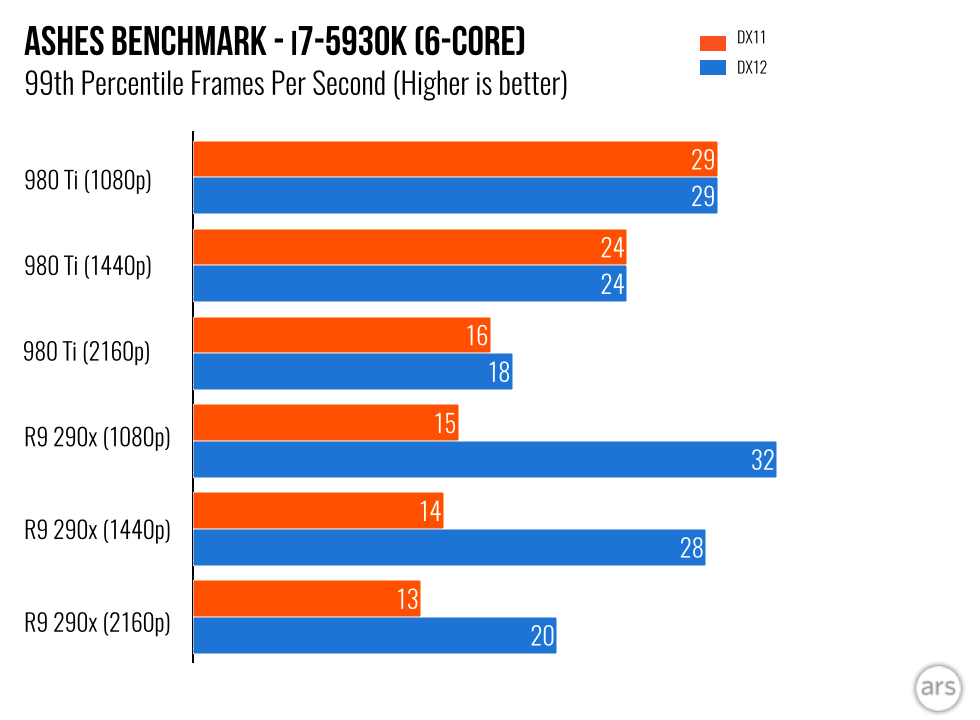 I know I said I didn’t find the answer I wanted, but I sort of fibbed about that a bit. Actually, when you look at the benchmarks for the R9 290X, it seemed to do better with less cores and threads. This is pretty good news for me because I could easily save $100 on my upgrade by going with the i5 and get better performance for it with my two R9 290’s in crossfire. I didn’t see this at first, but it was nice to see Ars Technica include both results in their benchmarks. Yesterday, I had a hard time giving AMD a huge pass on the results because there are still too many considerations that haven’t been tested yet. Today, while I won’t say this is a guaranteed sign for success, I believe that Fiji architecture might be giving team Red a much stronger lead than I originally anticipated. Time will tell, but it looks like AMD was made for DirectX 12 and if the future of gaming keeps heading that way, this is great news for everyone.

DirectX 12 is a Great Thing for AMD

Ashes of the Singularity Scaling: The AMD Crossroads

Getting up to Speed with Fiji and Maxwell